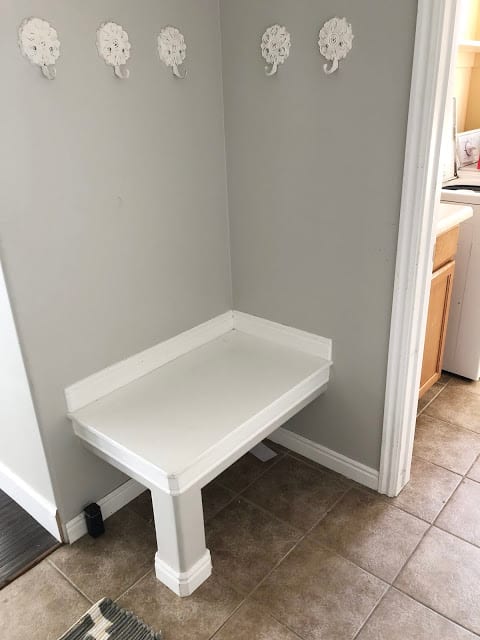 When we bought the house I thought this bench was such a great idea. Turns out it was a space hog in the tiniest of mud rooms. I HATED the bench. The kids just piled stuff on it, under it, and around it.

So we bought this handy shoe thing to try to organize things. It worked great, but it stuck out into the doorway. So much fun to angle past that thing with a laundry basket. Our poor elbows. 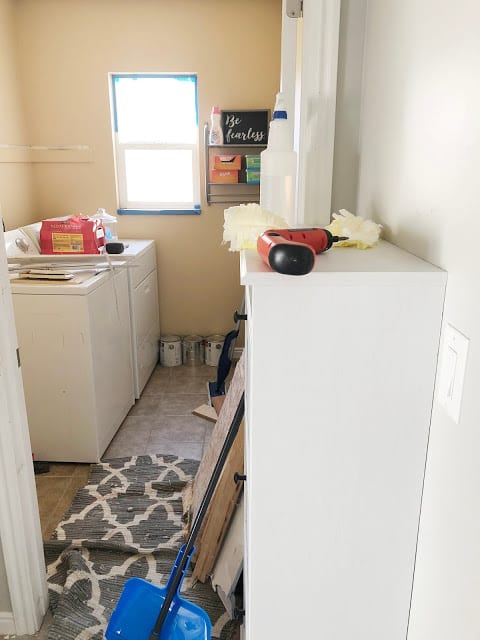 And yes, the baseboards were mismatched. We replaced the flooring and baseboards everywhere but here, TWO years ago.

So I guess I hit my breaking point one Sunday in October, and I told my husband I was going to smash that bench. My plan was SO SIMPLE.  I would take the bench out, replace a single tile, move the shoe thing, and finally update the baseboards. I’d have it finished in a week. He didn’t want to get into another project so I told him I’d do it myself. Easy peasy. 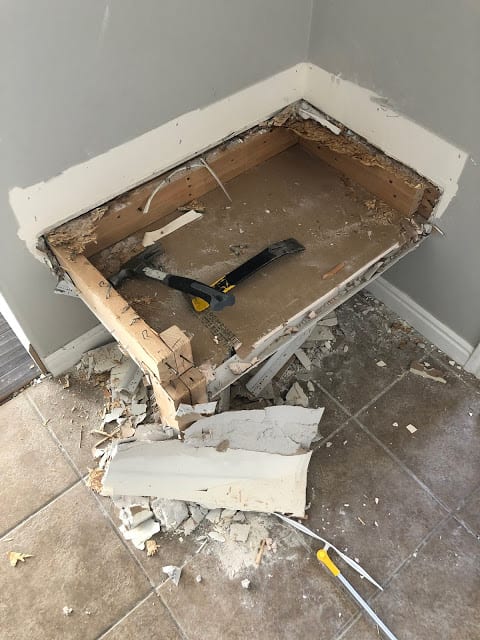 You know what wasn’t easy? All of it. Starting with the bench. That stupid bench was built by a guy who probably tucks his nail gun in at night and sings it lullabies. It was INSANE. Why use two nails when you can use six? Every five inches.

The only thing in the world that guy loves more than his nail gun is his staple gun.

The one fun part was watching my ten year-old have the time of his life pounding the sheet-rock to pieces with a hammer. 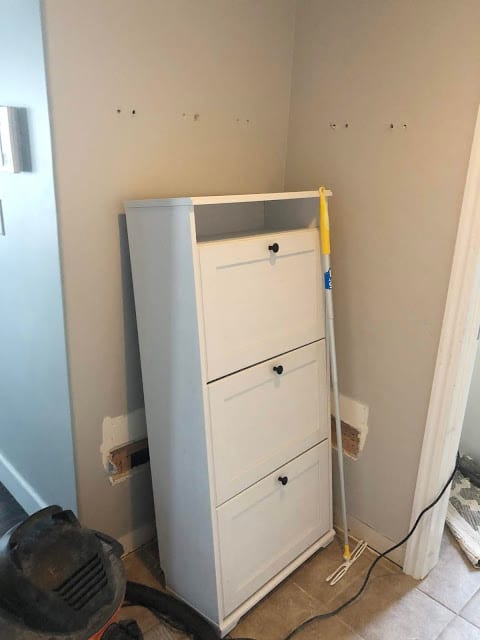 When it was gone, we were left with gaping holes in the walls, and a lot more patching than I wanted to do. So I decided to put up board and batten over the whole thing. My skill set is mainly limited to destruction, so we hired a handyman. 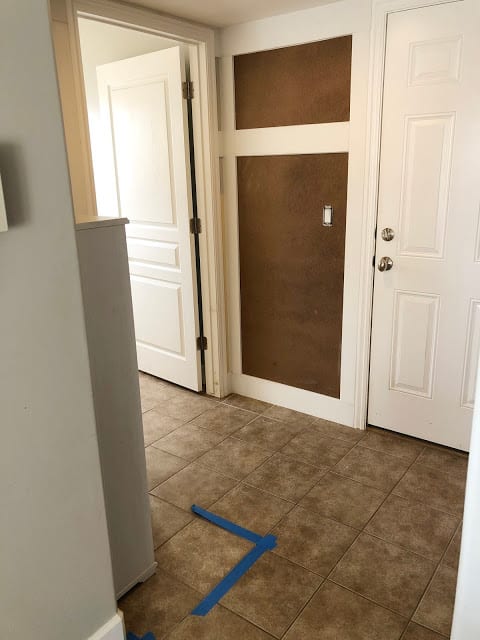 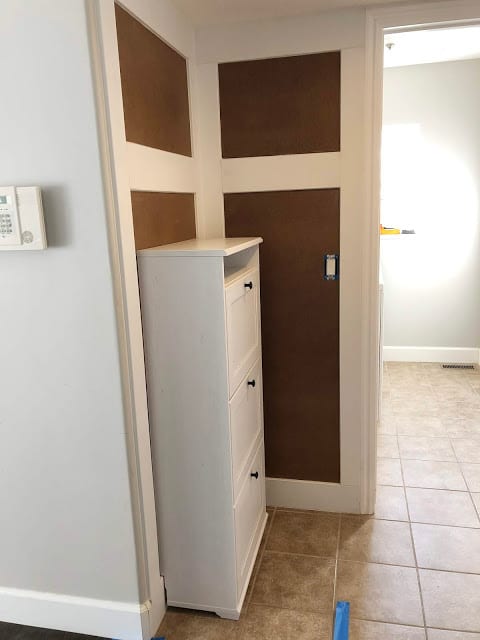 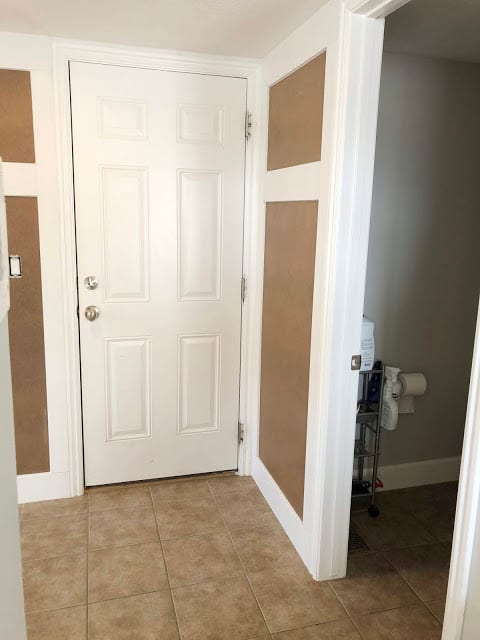 He did great work! And he fixed a few other things around the house while he was here.

This project had one more facet that I haven’t mentioned. I hated the laundry room too. 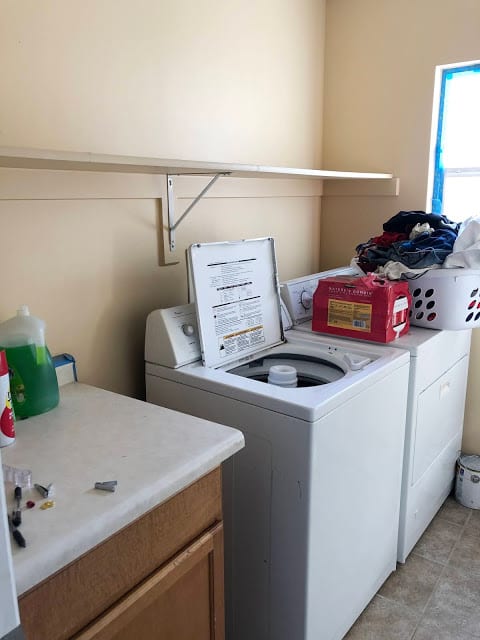 I’m grateful to have a laundry room, truly. But it was a mess. The one cabinet was packed with cleaning products, dog supplies, and cleaning rags. There was stuff in the back that was older than some of my kids — because out of sight, out of mind. We needed better storage.

So I told my husband that I’d just pop on over to Ikea, pick up some cabinets, and fix it all up. Easy peasy.

Again, I’m better at destruction. I got everything torn up without any issues.

Then I went to hang the French cleat for the new cabinets and drilled into a drain pipe. The internet gave me a quick lesson in pipe repair. A few swearwords later we were up and running again.

Somewhere during this period of mess and chaos, I waded into the disaster to do some laundry and a miracle happened. The ancient machine died. First it screamed at me REALLY LOUDLY, and then it was over.

My husband will forever be suspicious of the timing. It was hard not to be giddy. But I swear, good as I am at destruction, I did nothing to that machine.

On day 527 of my simple makeover, my mother-in-law texted me to ask how it was coming along. The following day, she and her husband came over and hung the cabinets. They’re the best. We aren’t handy, but we’re glad they are.

I put the knobs on all by myself.

And now, for the first time ever, EVER, I kind of want to do some laundry. We’re still waiting for some trim pieces for the cabinets, but I’m so in love! 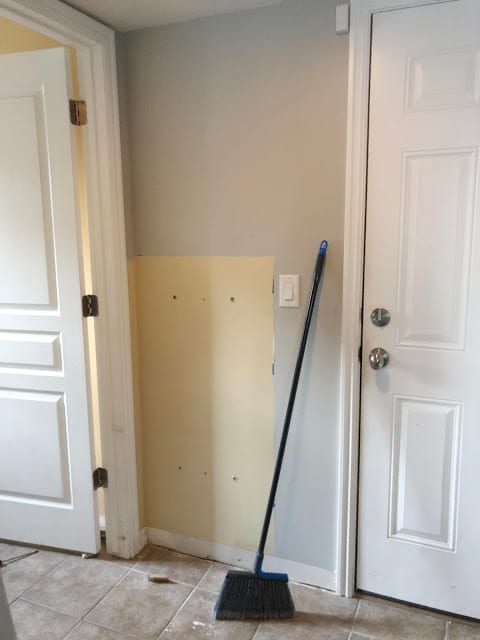 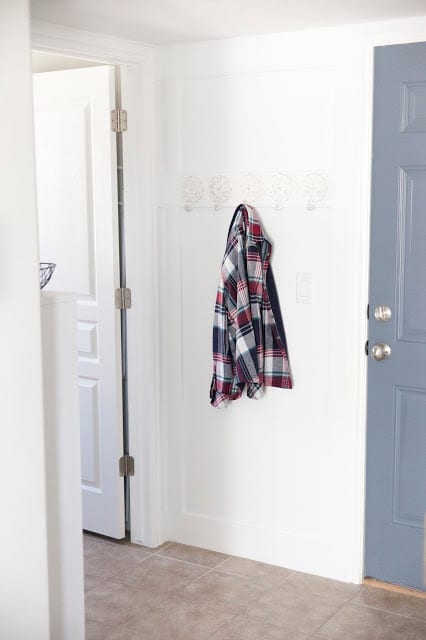 We painted the door the same color as our kitchen island. 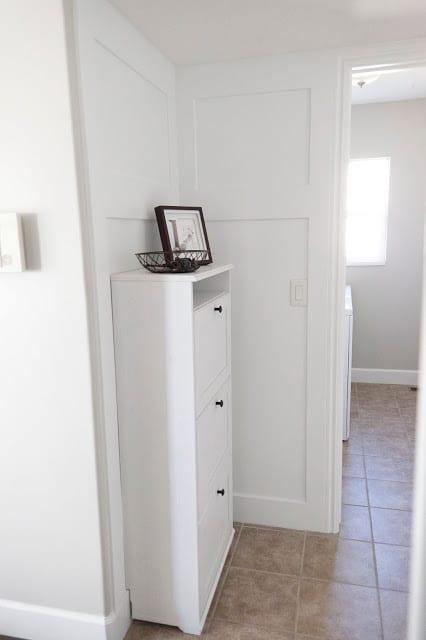 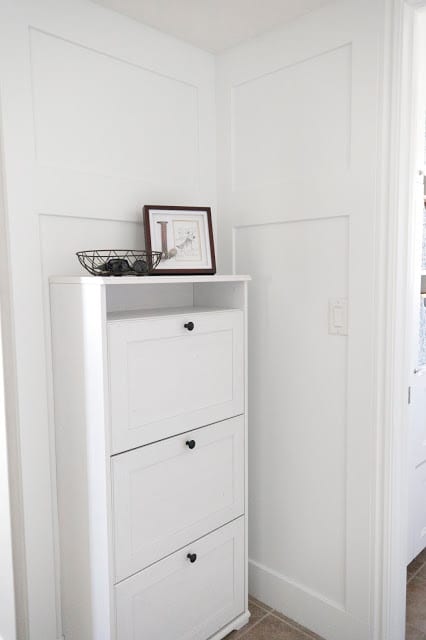 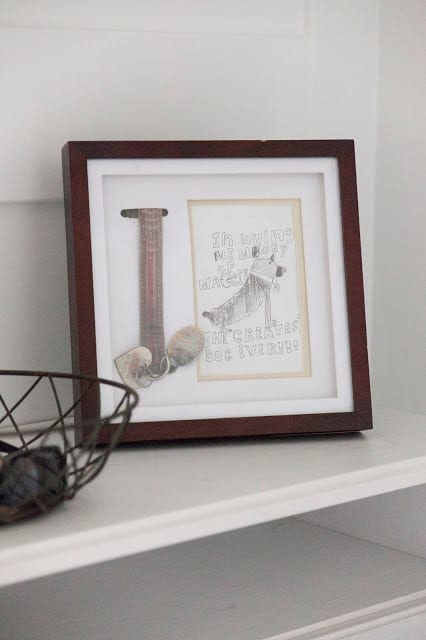 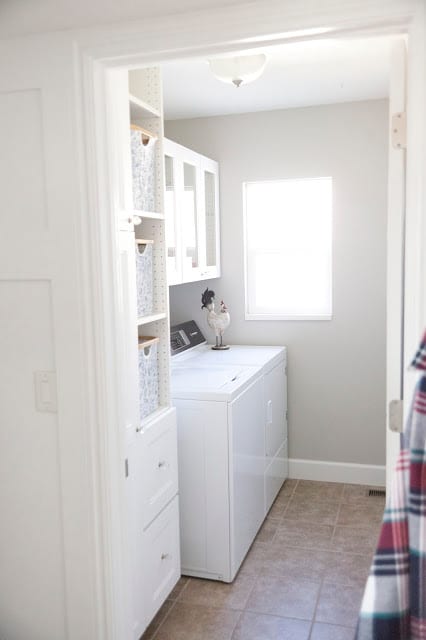 I guess this is also the part of the house where we memorialize beloved pets — Poochie (Maggie), and the kids’ pet chickens. 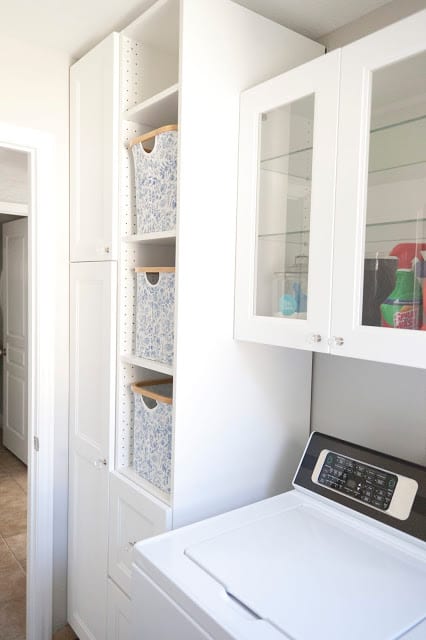 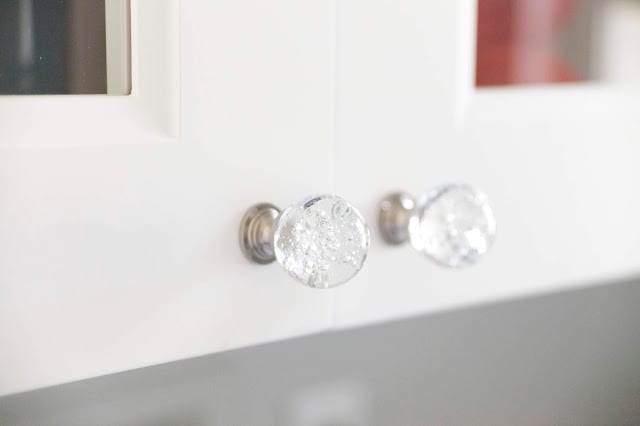 I love these little bubble glass knobs from Home Depot! Did I mention I put them on all by myself? I can drill holes. 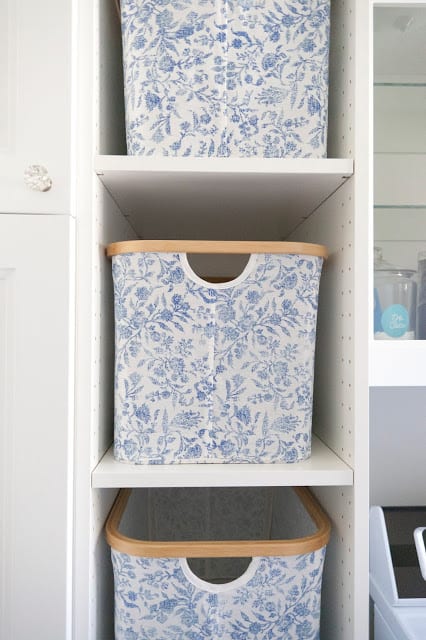 I love these laundry baskets from Target. But they’re so cute and clean, I kind of don’t want to put laundry in them. 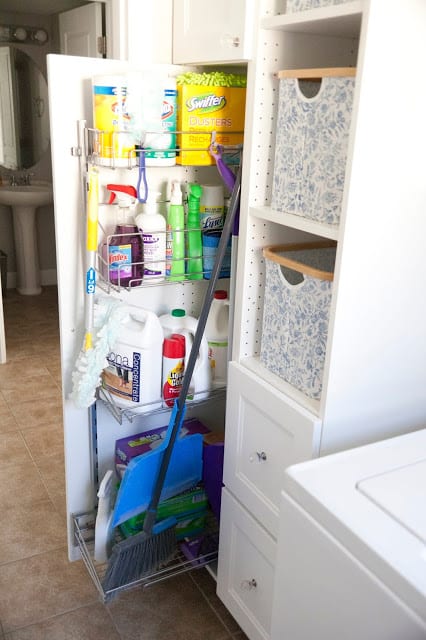 I LOVE this organizer from IKEA!!! It’s AMAZING. I ushered my kids in to show it in a big reveal, when my oldest spotted something blue dripping out of the cabinet over the washer. 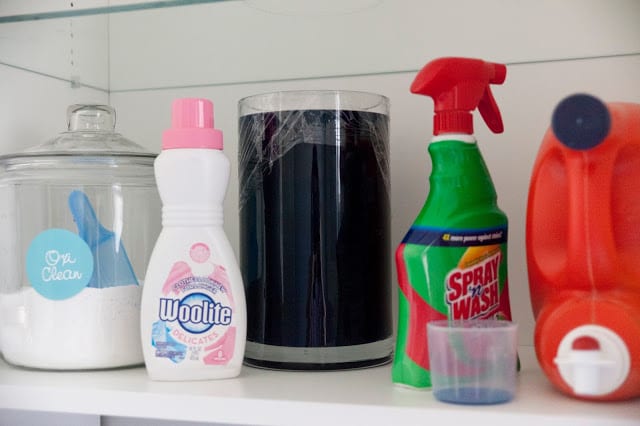 Now I have a vase full of Tide. The container had a crack and was leaking everywhere.

I’ve never had brand new matching machines before. So shiny; so many buttons. We will use three of them. But I LOVE them!!!

I’m so happy to be finished. And this one week job only took a month!

Side note: I’m not handy, but I’m pretty good at hanging things. The hooks in the mud room are challenging because they’re a little wonky and the holes don’t line up. So I laid them all out on paper and made a template. I marked each hole with a pencil, taped it to the wall, and drilled away. So much easier than trying to piece it together on the wall. 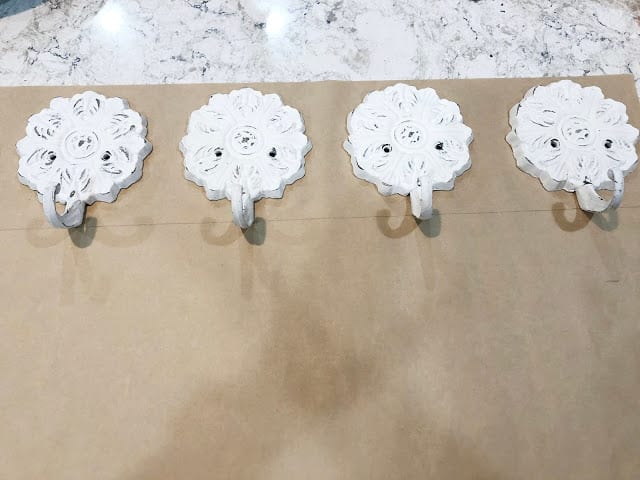 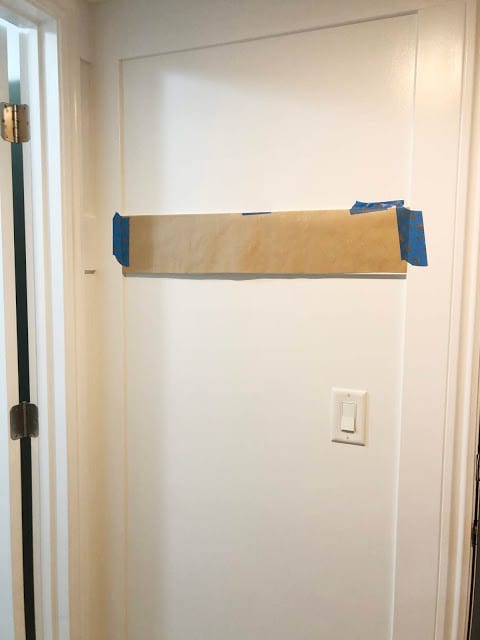 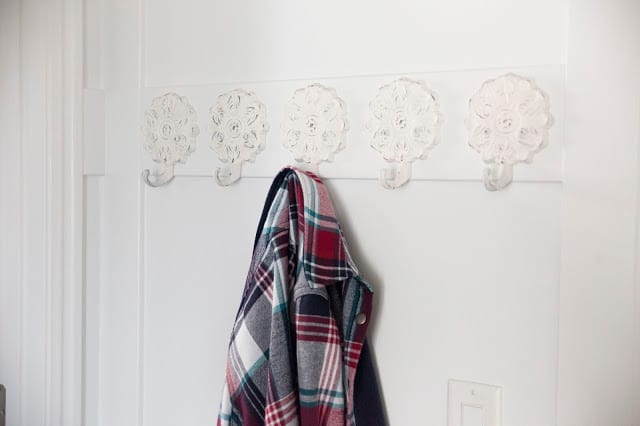